Winter is officially over. How do I know? It's not because the calendar says so. In fact the mornings this week have been pretty cold. No, there is a better sign of spring han a yard full of robins jousting for mating rights (which I saw this morning). When I look out the window of my office on campus at all the students walking between dorm row and center campus, I notice that female footwear has gone from all Uggs all the time to mostly flip flops and a few assorted sandals and sports shoes. The upper body clothing hasn't changed (yet), but the footwear is definitely in tune with the warm season. Now if we could actually have a warm day or two........ 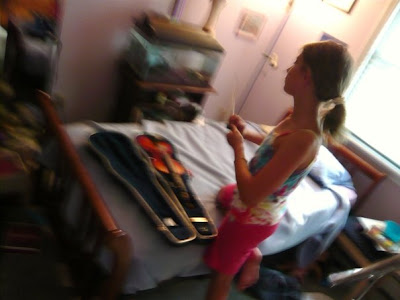 On the home front, swim season is over giving Rebecca and Ben a couple of weeks or so to laze around the house instead of swimming their tails off with the Sea Dogs. They have each been invited to join the next level of swim team. Rebecca is excited, Ben less so. He is not as enthralled about swimming but he is good at it and we are encouraging him to stick with it. He probably will just to please us but I doubt that his willingness will continue on into the upper levels. Seeing how Ben and Rebecca have developed physically this year, thanks to hours of practice, I don't think it's wrong to keep him on the team, especially since his free time would otherwise be wasted hanging out at home sneaking in TV time...... 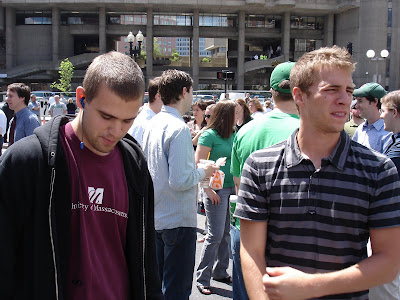 Speaking of warm weather, it was nearly a year ago that Frederic, Thomas, and I attended the Celtics victory rally in Boston where we happened to be for a visit to Mass General. So much has happened since then!! We had no idea whatsoever. All has turned out well and we are planning a big family trip in July. I will do a three week contract as the ship's doctor in Alaska and the kids (minus Frederic), Karen, Mom, Bern, Dave, and Leila will join me for the third week. 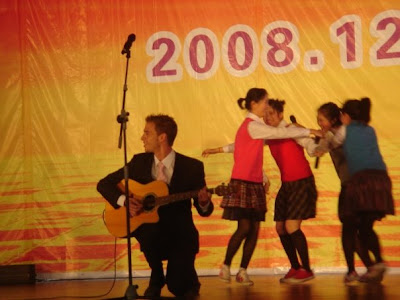 Frederic of course will not be in attendance because he will have shipped out to somewhere in China to begin his stint with the Peace Corps teaching English to Chinese English teachers and to continue his budding career as a Chinese pop star. We are anxious for him to come home for a two-week visit in June. A short camping trip and a concert ("Rain") are in store.

Well, enough newsiness. Until the next posting,